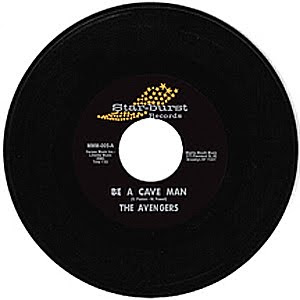 Brooklyn label Mighty Mouth brings you two tracks from two different 45s by The Avengers. Both tracks "Be a Cave Man" and "I Told You So" are the Mighty Mouth label owner's personal picks from the short but sweet Bakerfield, California garage band's discography, and once you check them out you will better understand why. The track "Be A Caveman" could possibly be 1965's most sexist track from a distance, but after an honest listen you'll understand the tongue-in-cheek comparison made between prehistoric treatment of women and the then-modern-day chivalry of the mid 1960's. "I Told You So" sounds as if it may have been a track that was too good, too soon, compromising The Avengers' potential for success. It wasn't until a few years later that songs like "Tell Her No" by the Zombies broke out, but perhaps "I Told You So" could it have been a response to the songs of the previous year such as "You Really Got Me" by The Kinks? Or was this simply an unexplained part of the U.S. rock scene surrounding the British Invasion? The answers remain in the dust of garages world-wide. You can try to hunt down the originals and shell out a couple hundred bucks a pop, or hop over to Mighty Mouth for a pristine, affordable copy.