Ok. The results are in. Here are the stats. The quiz received a total of 376 views and 57 people tried the quiz out. Of the 57 entries, only 3 people scored perfectly, but unfortunately not a single one of those people wanted their names to be mentioned. I can tell you that the three winners were from the following locations: , , and .

Question #1 received the most correct answers.

Question #10 received the most incorrect answers.

I’m keeping the game open if you want to try again and I plan on doing a part two in the near future. Thanks everyone for getting into this. Fun fun. So I've decided to add a small section to the side bar of the site. Since I constantly check out music and can't always figure out how to incorporate certain finds into the page, I came up with "Recent Scores" as a solution. The "Record of the Week" section will remain but will continue to stay focused on records that were released within the past year or so. All other interesting record finds will be covered at no specific rate or pace in the "Recent scores" section, located below the "Today in History" section.
Posted by Jeffo at 11:32 AM 1 comment: 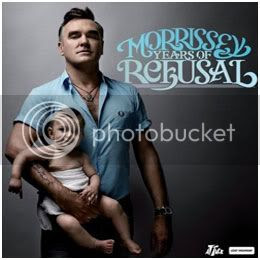 Morrissey’s latest album, Years of Refusal definitely has its moments. At first glance, the album’s gaudy cover art screams train wreck and instills a deep fear in most any Morrissey fan. Moz is smirking and dressed in Fred Perry, holding a godlessly ugly baby. Both are clad in decorative body art; the baby has a butterfly on “his” forehead while Morrissey sports a scar-like ornate caterpillar on his right forearm. Still hanging on to your inner child? Not phased by your graying hair or widening jaw? Perhaps another metaphor we’ll all look back on and understand, but as of now many of us stand confused.

When you open the record up, you realize quickly that no lyrics were included in this album, but in their stead you get an obnoxious picture of his band ironically donning faux-vintage tees decorated with feminine imagery. I got over the album’s immediate lack of amenities and jumped straight and open-eared into the music itself.

The album starts strongly with Something is Squeezing My Skull, a successful demonstration of Morrissey’s current vocal strength and lyrical maturity, as well as the band’s competence in laying down an interesting foundation for such. His voice is showy, confidant and strong yet playful in his range-stretching risk taking. He wastes no time in alluding to his perpetual misery on his everlasting quest for self. Next, the album quickly takes a dark and interesting drum-riddled turn with Mama Lay Softly on the Riverbed and then strategically slams you into back-to-back hits with Black Cloud and I’m Throwing My Arms Around Paris. Both songs are strong but I personally tend to favor the lyrical content of Black Cloud over … and the instrumental efforts of … over Black Cloud. In fact, I haven’t been knocked out like I am by Boz Boorer’s introductory guitar riffs in …Paris since Vini Reilly brightened the room with his work found in Morrissey’s 1988’s Suedehead hit. All You Need Is Me sounds familiar to most because it was one of Morrissey’s “Greatest Hits” which he ingeniously released in early 2008 as a “currently unreleased track” on Morrissey’s Greatest Hits album. Then there’s When Last I Spoke To Carol. I knew I’d enjoy this song from the title alone. Dabbling in some sort of poor Spanish-English translation meets neo-Shakespearean word arrangement, the title is all too Morrissey. The lifeless eeriness of the song accompanied by a perfectly creepy subject name “Carol” was enough to hook me. And, as if he hadn’t toyed with us enough with the title, the final lyrics “To the rescue/Nobody ever comes” confirms his consciousness in these doings. That’s How People Grow Up is strong but revisited (another Greatest Hits track). In One Day Goodbye Will be Farewell, Moz takes a tired subject and molds it into something emotionally tangible and original. This is the marking point in the album where I feel the heaviness of his material really begins to set in.

In 1987, as a member of The Smiths, Morrissey sang “I come to wish you an unhappy birthday” and twenty two years later he hits us with a hilariously devastating track It’s Not Your Birthday Anymore. In this song he talks of how he owes the birthday subject nothing since it’s not his or her birthday anymore. I found it confusing and humorous to think one could flip-flop on their birthday wishes, whether they’re for the same person or not. You Were Good in Your Time sounds like typical self-deprecating Morrissey trying to pass off a career funeral for something that could easily fit the description of a song about a trusty pet who recently passed. The album ends in two very intense songs: Sorry Doesn’t Help and I’m OK By Myself. Both songs leave you feeling personally affected but somehow empowered by a blast of reality.

It’s no coincidence that Morrissey released his first solo record Viva Hate only six months after The Smiths released their final studio album. The man is a song writing machine whose musical products have not surprisingly outnumbered those of the band he originally became known for. Morrissey is obvious and vocal about his progression as an artist. Just as he did concerning The Smiths final release Strangeways, he is calling Years of Refusal his best work to date. Unfortunately, I can’t agree with him there. I blame it on the simple fact that his work with producer Jerry Finn only really worked for him once in the past with 2004’s You Are The Quarry. The problem with that record was that its polished pop edge murdered the sincerity and depth of the music and seemed aimed at a younger, newer audience whom of which I don’t think ever took. Instead of working with a man who caters to the musical needs of fifteen year old pop-punk suburbia, I wish Years of Refusal was an epic Tony Visconti project as Ringleader of the Tormentors was. The songs on Years all lend themselves to a sound that should have been handled by a seasoned producer who wanted to make a work of art versus a collection of B+ teeter-the-line songs. Morrissey deserves better, as does his faithful fan base. Oh, and once you realize that he sings the word “Love” in 75% of the tracks on Years, you’ll thank me for pointing it out.

Years of Refusal is a far cry from his early records, and an album that could only be the product of a 10-album creative metamorphosis. I think I get the imagery now. Fly Morrissey, fly. Your caterpillar days are over.

A very happy birthday to the compact disc, which turned 30 this week (march 8th). In the past few decades the CD has remained the standard digital data storage medium, and only until recently has it begun to loose its glimmer.

The CD was first introduced as a prototype as "Philips Introduce Compact Disc" at a technology press conference in the in 1979. The combination of economic recession and Mp3 / other digital music files have caused a serious drop in compact disc sales. In 2008, it was reported that CD sales dropped by a devastating 20%.

The first recorded CD was Alpine Symphony by Richard Strauss.

The first CD was actually manufactured on August 17, 1982.

Royal Philips received the EEE Milestone Award for its part in creating the compact disc.

CDs make great coasters. Hang on to them.

It's been twenty eight years since the Eno-Byrne duo collaborated on a joint release, and I must say that it was well worth the wait. Original glam-rocking star Brian Eno and New Wave Art Rock pioneer David Byrne are at it again. This time it is a little different. If you can recall the genius of their 1981 album My Life in the Bush of Ghosts, and you are expecting the same experimental sounds, you will be surprised by 2008’s Everything That Happens Will Happen Today. My Life was written during Eno’s ambient/experimental years; the Roxy Music and “Here Come The Warm Jets” days were behind him. For Byrne it was a time sandwiched between two of the greatest Talking Heads releases: Fear of Music and Remain in Light. This was an extremely creative time for both musicians. My Life experimented with world music concepts as Eno would patchwork his “found objects” into the quirky percussion on the album. The ambient and electronic “ghosts” of the album would be all too fitting given Eno’s work and Byrne’s creative animal at the time.

Everything That Happens Will Happen Today is a thought-provoking title for a thought-provoking album. The two explore huge ideas, both lyrically and musically from start to finish. Eno found help to write most tracks on acoustic guitar while Byrne expanded on the technical aspects of each ringing chord to find a happy medium. The songs are reminiscent of mid-tempo mature late nineties indie creations, but with an all-too-familiar gleam. Byrne’s vocals are those of late period Talking Heads with a mid period Roy Orbison flare. The songs on Everything That Happens are eerily precise in capturing the realness and purity of the moment we just lost. A different direction for both, but it definitely works.