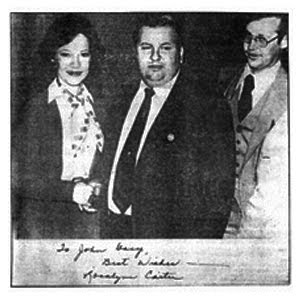 The Mentally Ill were an early addition to the Killed By Death punk compilations (Gacy's Place on KBD #2), and the Gacy's Place 45 remains one of the more sought after records with a song featured in the series. The record screams "a brand of DIY punk with disturbing conviction" for a few reasons. The cover alone tells the story of what is to come with a photo of First Lady Rosalynn Carter shaking a young John Gacy's hand. The thousand yard stare in Gacy's eyes and the sincere "Best Wishes" at the bottom of the photo start the unsettling of your stomach, but that's just the beginning. The track itself is a raw energetic blast of weirdness from start to end. The lyrics detail a first person point of view as a Gacy captive to the point where you'll feel like the bloodied, clown paint smeared victim.Once you're over that, the second side goes on to "Paddedd Cell" a frighteningly detailed account of a mentally ill patient. And then… there's "Tumor Boy", a fast-paced shredder that details a fellow with similar problems to those of the Elephant Man. All of the tracks have a perfectly poor production, but "Tumor Boy" takes the cake. There's even a part about halfway through the song where a channel just cuts out for a few seconds leaving a bare but beautiful moment in the song. The record is a terrifying mess but in that way you hoped it would be.