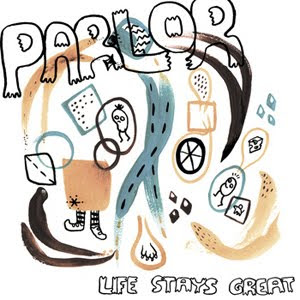 Yesterday, my good pal was generous enough to gift me this single along with Parlor's first s/t LP. He had me check out the LP before the 7" because he had "already heard the album and it's great so let's go with that". My initial response was that I instantly knew that Parlor was a landlocked surf-influenced rock group. On their debut LP, the group came off as a bunch of indie rockers in the windy city daydreamin' about waves they'd have to drive 2,000 miles in any direction to actually encounter. It excited me to know that even more groups were journeying this successful and trendy path, but that Parlor was approaching their sound with a subtlety that didn't cue the horrid smell and feel of gritty sand-polluted suntan lotion. When my friend left, I investigated the single alone. This new split label release, aptly titled Life Stays Great , speaks for the band's growth as a group who are distinctly remaining creatively gravid while exploring new sounds. On LSG, Parlor hardly dabbles in sunshine and seagulls, and all four songs take a hard cold turn toward a dancier post-punk ideal a la Aussie boppers Love of Diagrams or legendary Georgians, Pylon. All four songs are tighter, vocals are often doubled and hardened, and the overall vibe of the songs are more mechanical versus the group's previous approach as lemonade-drinking hammock swingers. Whatever Parlor's next move is might surprise, but if it compares to what they've tracked so far, it's going to be juuust fine.