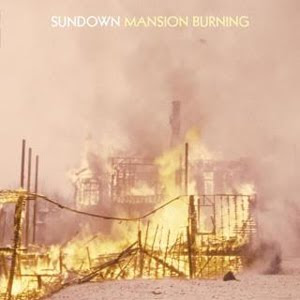 In the early 00's, whatever music scene was attempting to exist was overrun by formulaic rock bands -- their flowing chestnut locks concealing their eyes as I forked over my not-so-hard-earned early-twenties cash for merch and barroom admission. Soon after my interest in these groups fizzled, I realized I'd been hoodwinked and left with a stack of unremarkable records and even less compelling t-shirts. Ever since, I've be wary of the "bar band" label. Sure, these are my issues to work out, but this jilted lover mentality isn't easy to overcome. Columbus Ohio's Sundown exhibits many of the symptoms that make me look at Mansion Burning with squinted eyes and a scowl. By the cover art and news that one member (Dustin White) is also in Times New Viking, I was expecting something a bit more chaotic than the twang infused alt-rock that greeted me. T.K. Webb, Chief songwriter and front man, has been around and has the uncanny ability to convey that fact with little more than his plaintive voice and strum. "Forever Too Far" seems to be the standout track, or at least the one I keep returning to. But there's something about this band (as I try to put any prejudices I may have aside) that isn't clicking with me -- if the energy level was kicked up a bit they could be flirting with Reigning Sound territory, but what IS being played is simply something that no longer interests me. However, I'm not so clouded as to overlook Sundown's appeal. I have a feeling that if you 1) own a framed Whiskeytown posted (but only if it's framed), 2) own every record The Afghan Whigs ever recorded, or 3) are a man currently wearing more than one necklace, you might love these guys. I hope that doesn't sound patronizing because I mean it sincerely, I'm trying to paint a picture. These plucky midwestern hymns could really connect with someone who likes their rock dusty rather than dirty, but it ain't me, babe.