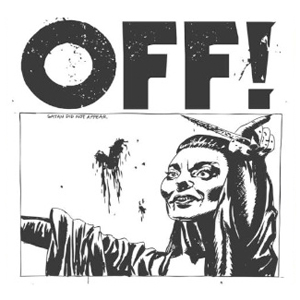 Legendary Cali punker, Keith Morris and his aggro super team of punk and rock veterans (D. Coats - Burning Bridges, S. McDonald - Redd Kross, M. Rubalcab - Rocket From The Crypt/Hot Snakes) cram sixteen explosive tracks into one full length, self-titled album, OFF!. Morris has not ceased to excite and entertain; his vocals are loud, mildly distorted, and in your face…like a bedraggled rendition of Iggy Pop's New Values alongside the charm of eighties American punk influenced throw-backs. The songs (which all hover around a minute each) squeeze in as much technical riffage possible without completely overwhelming the targeted listener. The lyrical content is intelligible yet somewhat cryptic, most of which focuses on Morris's discontent with who knows what, of which he makes one thing abundantly clear: He's ready to fight for it.  OFF! is a story of apocalypse, disease, social disorder, mania, paranoia, drug abuse, and anger.  Morris lays out his thoughts briefly enough to send your imagination a thousand miles in multiple directions, that is, if you are actually listening and not skating, fighting, or partying while this record spins. Regardless, OFF! is a Rorschach of sorts. When you finally believe that you know what's going on, you still won't be able to decide if it's you or Keith Morris who is the patient who needs the immediate clinical attention.